The Moon, (sometimes just called Our Moon or rarely Terra Moon) is Earth's closest neighbor in space. The moon formed 4 billion years ago when a large object (about the size of Mars) collided with Earth.

Possibility of life on The MoonEdit

The moon is a featureless, bland, dust-filled landscape. Scientists so far have found no evidence at all of life on the Moon.

On July 20, 1969, the Apollo 11 manned spacecraft landed on the moon. The passengers were Neil Armstrong and Buzz Aldrin. Six hours after landing, Armstrong became the first man ever to step on the moon, or on another landscape. Armstrong stated, before stepping onto the moon, "one small step for a man, one giant leap for mankind." Armstrong and Aldrin spent about 2 and 1/2 ours on the moon, collecting lunar rocks and exploring the lunar landscape. 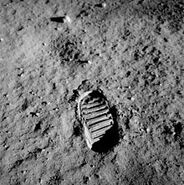 Earth, as seen from the Moon. 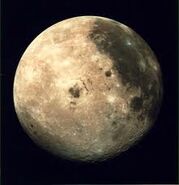 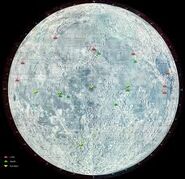 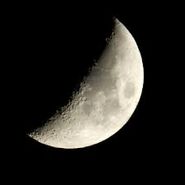 Add a photo to this gallery
Retrieved from "https://theuniverse.fandom.com/wiki/The_Moon?oldid=3963"
Community content is available under CC-BY-SA unless otherwise noted.