Sedna (official name 90377 Sedna) is the farthest known dwarf planet in our solar system. Astronomer Michael E. Brown, co-discoverer of Sedna along with the dwarf planets Eris, Haumea, and Makemake, believes it to be the most scientifically important trans-Neptunian object found to date, as understanding its unusual orbit is likely to yield valuable information about the Solar System. Sedna has the most elliptical orbit of any other body in our solar system, taking 11,400 earth years to complete.

Sedna was discovered by Mike Brown, Chad Trujillo and David Rabinowitz on November 13, 2003. On that day, an object was spotted moving 4.6 arcseconds on a duritation of 3.1 hours, relative to stars. This revealed that Sedna's distance was about 100 AU (Astronomical Units) from the sun. When Mike Brown announced the discovery of Sedna, he said he believed it was the first member of the inner Oort Cloud. Brown also said Sedna could uncover alot about the early solar system.

Because 90377 Sedna's orbit is so elliptical, some believe the currently theoretical death star, "Nemesis"'s gravitational is messing with Sedna's orbit. 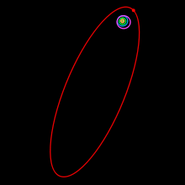 An artist's impression drawing of 90377 Sedna 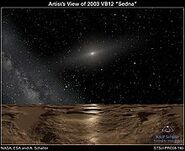 Another artist's impression of Sedna

A 3rd artistic impression of Sedna.

Retrieved from "https://theuniverse.fandom.com/wiki/Sedna?oldid=3941"
Community content is available under CC-BY-SA unless otherwise noted.