Makemake (official name 136472 Makemake) is a dwarf planet, the fourth dwarf in our system overall. Makemake is said to be the largest KBO, but this isn't confirmed.

Makemake was discovered by a team led by Mike Brown on March 31, 2005. The announcement acknowledging the discovery was made 4 months later on July 29, 2005. Initially, Makemake was named 2005 FY9. This was changed and Makemake was given minor planet designation 136472 Makemake. 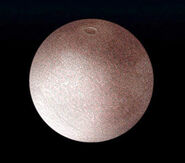 Add a photo to this gallery
Retrieved from "https://theuniverse.fandom.com/wiki/Makemake?oldid=3900"
Community content is available under CC-BY-SA unless otherwise noted.