Io is the closest Galilean moon to Jupiter. Io also is the fourth-largest known moon in our solar system, and the most geologically active moon, with over 400 volcanoes that are still erupting.

Io was discovered alongside with Europa, Callisto and Ganymede on January 8, 1610 by Galileo Galilei. However, another man, Simon Marius, claimed he had discovered Io before Galileo. But since Galileo had first claim on the discovery, Simon remained uncredited, and Galileo got the credit for Io.

One of Io's volcanoes erupting. 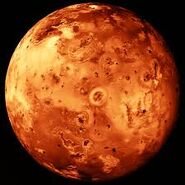 Retrieved from "https://theuniverse.fandom.com/wiki/Io_(moon)?oldid=3994"
Community content is available under CC-BY-SA unless otherwise noted.