Haumea (official name 136108 Haumea) is a dwarf planet in the Kuiper Belt. Haumea is one third the mass of Pluto..

Mike Brown and his Caltech team discovered Haumea December 28, 2004, with images they took on May 6, 2004. At about this time Jose Ortiz and his team found Haumea in images taken from 2003. Jose notified the MPC (Minor Planet Center) with an email late on July 27, 2005. Mike Brown originally conceded credit to Ortiz, but later suspected his images were frauds, after he disovered his logs had been accessed the day before their discovery of Haumea was announced, giving Ortiz enough time precover his images. However, MPC gave naming rights to Brown. 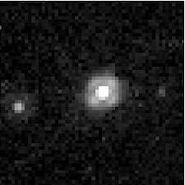 Retrieved from "https://theuniverse.fandom.com/wiki/Haumea?oldid=4018"
Community content is available under CC-BY-SA unless otherwise noted.