Europa (originally refered to as Jupiter II) is a Jovian moon, one of the four galilean moons, and the sixth-closest Jovian moon to Jupiter.

Possibility of Life on EuropaEdit

Life is thought to exist under the surface of Europa, due to beliefs of a gigantic ocean under the crust of Europa. An unammned spacecraft was in development, and sent to Europa and other Jovian moons was planned, but NASA cut off all funds for the probe.

A map showing the inside of Europa. 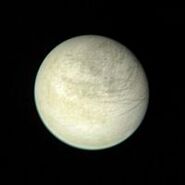 Add a photo to this gallery
Retrieved from "https://theuniverse.fandom.com/wiki/Europa_(moon)?oldid=3993"
Community content is available under CC-BY-SA unless otherwise noted.