Eris (official name 136199 Eris)  is one of the farthest known objects in our solar system. Eris is the most massive known dwarf planet, being 25% more massive than Pluto. Eris is estimated to be 0.27% of Earth's mass.

Eris was discovered by Mike Brown, Chad Trujillo and David Rabinowitz. Eris was spotted by them on January 5, 2005, with images taken October 21, 2003. This discovery was announced on July 29, 2005, the same day as Makemake was announced, and 2 days after Haumea was announced. The team had been looking for large TNO's frantically for a while, and after reviewing images taken a year and a half earlier, Eris was seen moving against the stars.

This was used to discover Eris

An artist's impression of Eris. 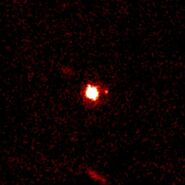 Retrieved from "https://theuniverse.fandom.com/wiki/Eris?oldid=4020"
Community content is available under CC-BY-SA unless otherwise noted.