Ceres is the first dwarf planet from the sun. It is also the largest object in the asteroid belt, and a Cererian year is 4.6 Earth years.

On January 1, 1801, astronomer Giuseppe Piazzi discovered Ceres while observing the 87th [star] of the Catalogue of the Zodiacal stars of Mr la Caille. At first, Giuseppe though Ceres was a comet, but then noted it's slow, planet like movement, and excitedly said it "may be something more special." Ceres was immediently classified as planet #5, moving Jupiter to 6th. However, in 1850, Ceres was reclassified as an asteroid. In 2006, the IAU classified Ceres as the first dwarf planet from the sun. 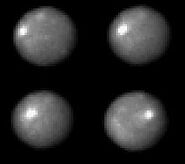 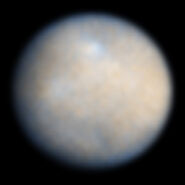 Retrieved from "https://theuniverse.fandom.com/wiki/Ceres?oldid=4016"
Community content is available under CC-BY-SA unless otherwise noted.